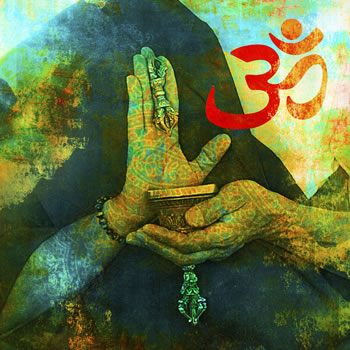 (excerpts of a 17 pages article)
by Nishtha Müller

The inspired poetic Word was the means of passing on knowledge and experience by the Vedic Seers and by Sri Aurobindo, especially in his epic Savitri. What do the Vedic seers and Sri Aurobindo in their poetic creations themselves tell us about the Word, its nature and usage?

The central idea of this article is simply to make potential readers more conscious of the great value of mantric texts and point out a possible way to approach and use them. In regard to the Veda it must be said right from the outset that there exists the special barrier of the Sanskrit language in general and the multi-layer meaning of Vedic terms in particular. In addition there is the all-pervasive Vedic symbolism. Sri Aurobindo often calls the Vedic Rishis “symbologists” and refers back to the period of the composition of the Vedic hymns both as the age of symbolism and the age of intuition. In fact Sri Aurobindo also makes much use of symbolism.

Let us begin now with some practical comparisons in regard to the transcendent origin of the Word as mentioned in the Veda and in Savitri. In Rig-Veda I.164 we read:

In the imperishable (place) of the illumining Word in the Transcendent Ether, all the Gods have taken their seat. Who does not know this (place), what can he do with the illumining Word (of the Veda)? But they, who know it, they sit here together in union. (39)

The radiant One has expressed herself in the forming of the flowing Waters. From one plane (of existence) she has manifested herself in two, in four, in eight, in nine planes. She is the imperishable with thousand (syllables) in the Transcendent Ether. (41)

In Savitri we find the following lines:

A glimpse was caught of things for ever unknown:
The letters stood out of the unmoving Word:
In the immutable nameless Origin
Was seen emerging as from fathomless seas
The trail of the Ideas that made the world …
(p. 40) 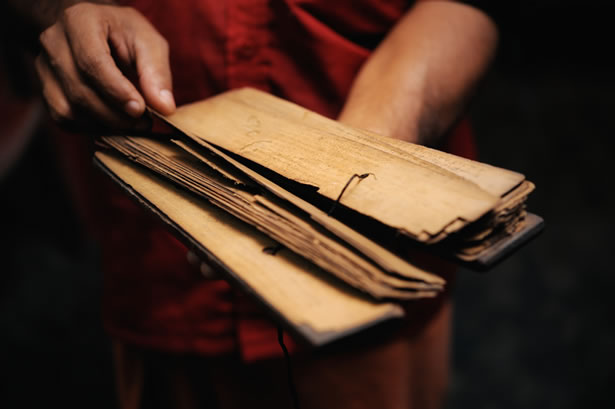 From all this we can deduct that on the transcendent plane or the superconscient we find an infinite potentiality of sound-forms, of which, in the context of human language, only a limited selection can be expressed through the organ of speech. Furthermore, in this context it is interesting to note that “akshara” is, in the later tradition, not only one of the names for the sacred syllable OM, but also the general name for all syllables of the Sanskrit alphabet, perhaps so as to suggest that each of its sounds is still connected with its imperishable
origin, “the unmoving Word”. Then it is no surprise that in the Tantra all Sanskrit syllables
are called “mātrikās”, meaning little mothers.
Here are more lines from Savitri:

A Wisdom knows and guides the mysteried world;
A Truth-gaze shapes its beings and events;
A Word self-born upon creation’s heights,
Voice of the Eternal in the temporal spheres,
Prophet of the seeings of the Absolute,
Sows the Idea’s significance in Form
And from that seed the growths of Time arise.
(p. 271)
Above the parting of the roads of Time,
Above the Silence and its thousandfold Word,
In the immutable and inviolate Truth
For ever united and inseparable,
The radiant children of Eternity dwell
On the wide spirit height where all are one.
(p. 282)
Let us now look at three verses from a hymn to Agni, where we see how the Vedic seers seek after the higher planes of the Word. The translation is by Sri Aurobindo (in Hymns to the Mystic Fire).

To thee men illumined come with their thinkings for the conquest, to thee the imperishable One [comes] with her thousands. (VII.15.9)

Let him become the father of the Father in the womb of the Mother; let him break out into lightnings in the Imperishable, let him take his seat in the native home of the Truth.

O wide-seeing Fire, God who knowest all births that are, bring us the Word with its issue, the Word whose light shines in Heaven. (VI.16.35,36) 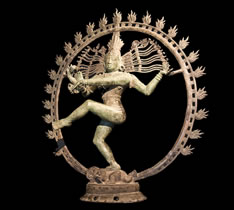 The different levels of the Word

With these last lines we come now to another most important aspect of the Divine Word, namely its manifestation on different levels of consciousness. The “imperishable One” (akshara in fem. gender) means here the Divine Mother or Consciousness-Force (Cit-Shakti) in “the native home of the Truth”, which most likely relates to the transcendent and supramental level of the Word. In this context let us come to another quote from Rig-Veda I.164:

The Word has been measured out in four planes. The possessors of the Word of the soul, who have the intuitive intelligence, know them. Three are hidden in the secret cave and give (outwardly) no sign; the fourth (material) plane of the Word speak the humans. (45)

In his book The Secret of the Veda Sri Aurobindo refers to the creative aspect of the Word and to the “secret cave”:

In the system of the Mystics, which has partially survived in the schools of Indian Yoga, the Word is a power, the Word creates. For all creation is expression, everything exists already in the secret abode of the Infinite, guhā hitam, and has only to be brought out here in apparent form by the active consciousness. Certain schools of Vedic thought even suppose the worlds to have been created by the goddess Word with sound as the first etheric vibration to have preceded formation. In the Veda itself there are passages which treat the poetic measures of the sacred mantras,—anuṣṭubh, triṣṭubh, jagatī, gāyatrī,—as symbolic of the rhythms in which the universal movement of things is cast. (p. 270)

It is in the later Tantric tradition that the four planes of the Word have been systematized into the following categories:

Parā-vāk, the supreme or transcendent Word;
Paśyantī-vāk, the seeing or illumining Word;
Madhyamā-vāk, the middle or connecting Word;
Vaikharī-vāk, the material or spoken Word.

Here is a passage from Savitri on the divine Inspiration that may give us a description of
Pashyanti Vak or the Seeing Speech in its purest form:

Oft inspiration with her lightning feet,
A sudden messenger from the all-seeing tops,
Traversed the soundless corridors of his mind
Bringing her rhythmic sense of hidden things.
A music spoke transcending mortal speech.
As if from a golden phial of the All-Bliss,
A joy of light, a joy of sudden sight,
A rapture of the thrilled undying Word
Poured into his heart as into an empty cup,
…
She looked upon the seen and the unforeseen,
Unguessed domains she made her native field.
All-vision gathered into a single ray,
As when the eyes stare at an invisible point
Till through the intensity of one luminous spot
An apocalypse of a world of images
Enters into the kingdom of the seer. (p. 38)
Here some verses from Rig-Veda X.125 where Vāk, the Goddess of the Word, herself speaks:

I am the shining queen, the gatherer of the luminous treasures, the original Consciousness-force of all
powers that take part in the sacrifice. The gods established me widely at many places as the one who
makes them enter multiply and is present manifold. (3)

… Whom I desire, I make him strong; I make him the possessor of the Word of the soul, a seer, one wise of understanding. (5)

On the head of this (manifestation) I bring forth the Father; my birth-place is in the Waters within the
Ocean. From there I spread out along all the worlds of becoming and with my top touch the transcendent Heaven. (7)
In his book The Future Poetry Sri Aurobindo envisions as the sign of a coming age of intuition a new consciousness that will express itself in a way similar of what the Vedic seers had already attained and what they called the Mantra:

What the Vedic poets meant by the Mantra was an inspired and revealed seeing and visioned thinking, attended by a realisation … of some inmost truth of God and self and man and Nature and cosmos and life and thing and thought and experience and deed. It was a thinking that came on the wings of a great soul rhythm, chandas. For the seeing could not be separated from the hearing; it was one act. Nor could the living of the truth in oneself which we mean by realisation, be separated from either, for the presence of it in the soul and its possession of the mind must precede or accompany in the creator or human channel that expression of the inner sight and hearing which takes the shape of the luminous word. (p. 217)
To understand better not only the above description of the Mantra but as well the way in which it should be practiced by us, let us have a look at another passage from The Secret of the Veda:

The mantra, though it expresses thought in mind, is not in its essential part a creation of the intellect. To be the sacred and effective word, it must have come as an inspiration from the supra-mental plane, termed in Veda, Ritam, the Truth, and have been received into the superficial consciousness either through the heart or by the luminous intelligence, manīṣā. The heart in Vedic psychology is not restricted to the seat of the emotions; it includes all that large tract of spontaneous mentality, nearest to the subconscient in us, out of which rise the sensations, emotions, instincts, impulses and all those
intuitions and inspirations that travel through these agencies before they arrive at form in the intelligence. This is the “heart” of Veda and Vedanta, hṛdaya, hṛd, or brahman. There in the present state of mankind the Purusha is supposed to be seated centrally. Nearer to the vastness of the subconscient, it is there that, in ordinary mankind,—man not yet exalted to a higher plane where the contact with the Infinite is luminous, intimate and direct,—the inspirations of the Universal Soul can most easily enter in and most swiftly take possession of the individual soul. It is therefore by the power of the heart that the mantra takes form. But it has to be received and held in the thought of the intelligence as well as in the perceptions of the heart; for not till the intelligence has accepted and even brooded upon it, can that truth of thought which the truth of the Word expresses be firmly possessed or normally effective. Fashioned by the heart, it is confirmed by the mind. (p. 271-72)
To conclude this short study, here are some more lines from the Rig-Veda:

A thought spoken from the heart and shaped into an affirming hymn moves towards the
Divine Mind its Lord. When it is expressed it remains awake in the finding of knowledge. O Divine Mind, acknowledge what now comes into birth for you.

Original it indeed comes into birth from Heaven. Being expressed it remains fully awake in the finding of knowledge, – dressing itself in happy white robes. This is the ancient-born intuitive thought (dhī) of the Fathers. (Rig-Veda III.39.1,2) 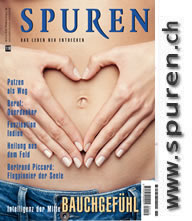 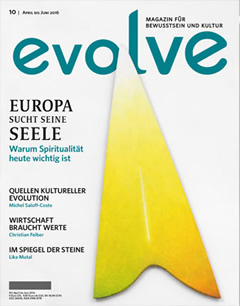 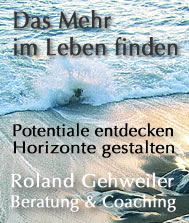